We noticed that you are using a browser that is no longer supported by our system, to enjoy the full Volvo experience consider changing browser
x
×

A SCHOOL has received a life-saving heart defibrillator after a proud dad contributed to Hartshorne Group's Healthy Heart Campaign by cycling an incredible 1,645 miles.

Matt Hammersley, whose son Elliot attends the Priory Church of England Primary School in Stoke-on-Trent, nominated the school to receive the life-saving equipment. Matt and his brother Simon, who works for the Hartshorne Group at their Potteries depot in Newcastle-under-Lyme, have both been part of the Healthy Heart Campaign since it was launched last October.

Staff and pupils at the school in Jubilee Road have now gratefully accepted the portable medical device, which can be used to restart somebody's heart in the event of an emergency.

Matt along with his brother Simon have logged 340 hours of cycling rides and walking via an online app. Hartshorne Group, which supplies and services Volvo commercial vehicles, donates £1 for every hour of physical activity completed, as part of its Healthy Heart Campaign to install defibrillators within the local community.

Kerry Forrester, Senior Learning Assistant at the school, said: "We're very grateful to Matt and the team at Hartshorne. It's reassuring to know we have access to a defibrillator. Our young students also enjoyed seeing Hartshorne's demonstrator truck!"

Ian Middleton, Managing Director at Hartshorne Group, said: "It was a pleasure to visit the Priory School. We're very proud of Matt and Simon’s efforts – both have shown what pedal power can achieve!"

The Potteries depot is one of nine sites operated by the Hartshorne Group across the Midlands. All of the depots are backing the Healthy Heart Campaign, which was launched in conjunction with the ambulance service.

Over 30,000 people a year in the UK suffer a cardiac arrest that takes place somewhere other than a hospital. Defibrillators come with voice instructions and do not require specialist training in order to use. 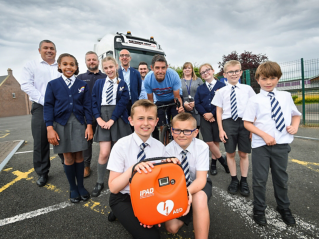 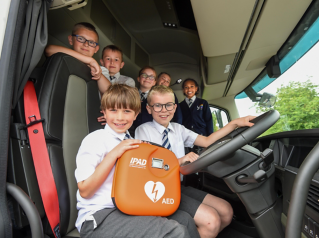